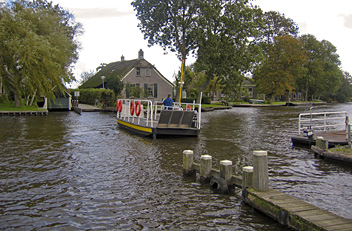 Well into the 20th century, the North sea penetrated deep into the Netherlands. These dangerous waters were called the Zuiderzee. It was decided to reclaim the land. This would end frequent floods and land would be won for agriculture. In 1932 the sea was tamed by a huge dyke, and the calmed water was called IJsselmeer.

The proposed reclamation was only partially implemented. Only two polders were realised. First the Noordoost Polder (1942), later the Flevopolder (1968). In the second half of the 20th century, the need for farmland sharply dropped.

The first labourers of that time, the pioneers, worked at the bottom of a sea that was just drained and where little would grow. A harsh environment.

Whoever walks this "Pionierspad", named after these pioneers, can hardly imagine the desolation and barrenness of the land: the polder now has turned into a rich agricultural area, magnificent forests, big farmsteads. There are many windmills. As a walker, you should visit the new townships of that time: Lelystad, Swifterbant, Zeewolde: weird urban products of their time. The path also hits the 'old' country: Giethoorn, among others.
People who have walked this path, report that they are pleasantly surprised. The new polders have a name of being boring... not so.