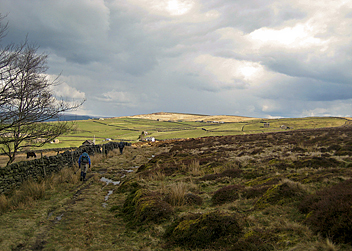 Thanks to the initiative and efforts of the European Ramblers Association (ERA), a network of long distance hiking trails traversing Europe came into being. The ERA was founded in Germany in 1969, and today has over 50 member-organisations devoted to long distance walking, but also to sustainable development of the countryside and, among other things, to the protection of something called European heritage, whatever that may be.

At this moment there are 11 European Long Distance Paths which as a rule lead through several countries (see map). Wherever possible these paths make use of, and coincide with, existing national or regional trails. They number from E1 to E11 (a new one is envisaged for the future: E12). But not all paths are complete. Apart from having to take the occasional ferry, there are some gaps, for instance on the E8 between Poland and the last stretch in Bulgaria.

In addition to the E-paths, there are other cross-boundary trails. Most famous is the Santiago de Compostela Pilgrim Way(s), which is not one single route but a whole network of main and by-routes from different corners of northern and eastern Europe, all ultimately leading pilgrims across the Pyrenees to the city of Santiago de Compostela in north west Spain. It is known by translation in different countries, such as St.James Way or St.Jacobsroute. In reality all pilgrims, medieval or modern, have always made use of existing walking trails and roads alike.

A more interesting collection of European trans-national trails is the Via Alpina, consisting of five trails (red, purple, yellow, green and blue) across the entire Alps and through eight different countries, and excellently documented.